At this year’s commencement ceremony, 855 newly-minted Wharton MBAs heard a bit of wisdom from within their own ranks.

Just five years after their own graduation, the co-founders and co-CEOs of Warby Parker — Neil Blumenthal and Dave Gilboa (both WG’10) – returned as featured speakers for the class of 2015.

“They embody the businesses that I think everyone in the millennial generation aspires to be part of,” said Dean Geoff Garrett. “Warby Parker does it cheaper, they do it better, and they do it with a purpose.”

Though the buy-one-give-one model isn’t the only successful impact business model, it is most certainly one of the most visible, as evidenced by the fact that Warby Parker has been one of the most high profile social enterprises in recent years. Working with an established nonprofit and a new public-private partnership with the New York City school system, the swiftly growing start-up has distributed more than one million pairs of glasses to people in need.

They’re also a great example to grads that making your greatest impact and using your strongest business skills go hand-in-hand, a career ideal we see more and more students aiming for.

And by all (bespeckled) appearances, things are only getting better. This April, the company joined the billion dollar valuation club after closing its Series D funding round.

Though that’s not to say they’re forgetting their roots: “Just breathing the air here makes us feel smarter,” said Blumenthal, as the pair addressed the crowd gathered in the Palestra on May 17. 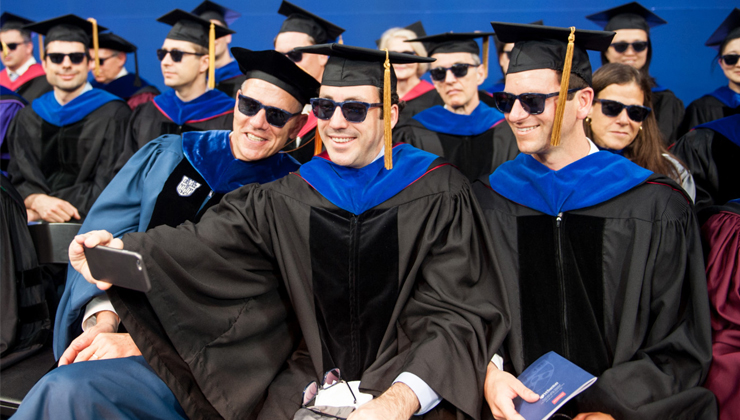 Lesson 1: All you need is…friends.

In life in general, and especially when starting a business, there will be moments when things will go downhill. Everyone knows about Murphy’s Law: anything that can possibly go wrong, will. You cannot stop these moments from happening, but if you can survive them with people you like and trust, you can laugh at these moments and learn from them.

Lesson 2: Treat others the way they want to be treated.

This is one of the core values that we have at Warby Parker, and one that we have enhanced over the past 5 years. It’s like the Golden Rule,  but different; it started off as “treat others the way we want to be treated.”

But people are complex and different, and empathy is everything. Try hard to understand the people you engage with in order to cater to their wants and needs. Practice empathy, and be grateful.

No one knows what a 360º review is outside of this room. “Circling up” is for kindergartners and hippies. And you don’t need to shoot people an email. You can just send it; it’ll get there just as fast.

Lesson 4: No is an excellent word.

From a business standpoint, strategy is what you don’t do. Saying no to potential distractions is even more important than deciding what to prioritize. And from a personal satisfaction perspective, saying no to the wrong people will ensure that you have time to spend with the right ones.

Any journey worth taking is full of risky, scary decisions. Conquer fear by minimizing it, not eliminating it. Take baby steps rather than giant leaps. If you feel like you’re standing at the edge of a cliff, take a step back. Think about how to break down that step into a million smaller steps.

It’s human nature to assume the worst; avoid doing so. Have enough confidence in yourself that when someone suggests a new idea or takes action with telling you first, don’t get defensive — don’t climb that latter of inference.

You can’t gain trust if you don’t give it away first. This doesn’t mean that you shouldn’t be skeptical at times, but trust first, then verify. If you can’t presume positive intent then you’re hanging out with the wrong crowd.

The problems in business school are well defined: you get assignments and you know that you have to complete those assignments. In the real world, there are no constraints. Problems are messy. Stakes are higher.

This doesn’t mean you should cheat on sleep, wake up exhausted, and need 5-Hour Energy shots to get you through the day. But it does mean that you should push yourself. Challenge yourself physically, emotionally, and intellectually throughout the day so that your eyes are already closing in that one second before you hit the pillow. That’s the right amount of tired.

And since you are always going to be tired, you’d better find people that energize you, that give you a shock to the system, and who in turn allow you to energize the people around you.

One of your most important roles in work life will be the ability to energize people. People derive their energy from you as a leader, whether you’re a CEO or whether you’ve just joined a company. You can multiply your impact by being a source of energy instead of an energy drain.

We encourage you to be a force for good in this world – and that’s certainly going to require a lot of effort. So if we can leave you with one lesson to remember, it’s always be tired.