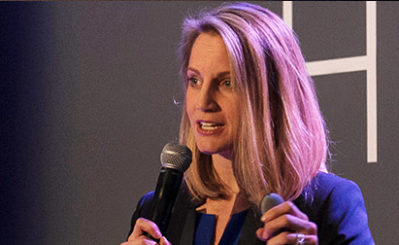 This piece was originally published on WomenEffect.com, an independent knowledge hub about gender lens investing. Women Effect’s content is now part of the Wharton Social Impact Initiative. Read more about the transition here.

Andrea Turner Moffitt is a leading authority on understanding women as investors. In this interview, she speaks about her extensive research, recent trends and opportunities in the space, and how she is harnessing these as co-founder of Plum Valley Investments.

How have things changed since you first wrote the power of the purse?

The book was the culmination of a global study that took about two and a half years. We looked at women investors across several countries, and the objective of the work, done in partnership with six of the big wealth management firms, was threefold.

One, it was to really understand the market for women as investors, not only in terms of size of dollars. One of the important things was to understand not just the total wealth women control but the actual decision-making power women have over investable assets, which was a very uniquely different way of capturing the market opportunity compared to what had been done previously in that research. In the U.S. we counted $11.2 trillion of investable assets, and so I think for the first time we really had some strong data points around decision making power, not just the total dollars women “control.”

We also really wanted to look at the composition of women as a market and clearly make the point that it’s not monolithic and that there are many segments to understand. We found overwhelming statistics of women as wealth creators, which I think is foreshadowing where we’re headed. There’s a huge growth of professional women in particular creating their own wealth through being entrepreneurs and businesswomen.

The second big theme that we tackled was what’s the unique value proposition as women investors? What do women really want differently around an investing experience? Women want returns, women want performance just as much as men. But there is a sense that women want what I call a greater basket of goods, this idea that they think about directing their capital in a more holistic way. Men want it too, but I think women just have a lower tolerance for only focusing on performance and product vs. thinking about greater outcomes, and I think that has had ripple effects within the industry. I think that it affects the way in which advisors are having a much more holistic conversation with clients.

The other thing that came out of it, which was something I really woke up and paid attention to, is the real increased interest in investing in private companies. This sense that there is a lot of innovation and even a lot of social change getting addressed through some of these start-ups and early stage companies, being started by innovative women entrepreneurs. And there was a thirst for better access to being able to invest in companies that had diverse founding teams that were really trying to solve important problems in the world and of course also had solid business models. That’s resulted in my own efforts in this space and co-founding Plum Valley investments. So that is what I’ll say is happening marketplace-wise in terms of the investing models.

Do you believe women investors do actually look for that a lot more now, and they look for proof that their firms and advisors are applying those lenses?

Increasingly there’s an expectation that anyone servicing you should have a level of diversity and inclusivity in their culture. It’s not a big cultural shift that has to happen, but I do think there’s a lower tolerance when that is not in place, or when biases are surfaced in a very obvious fashion.

Have you ever come across any data that suggests that when more women are investing, because they’re perhaps more attuned to considering gender in investments, that means more money gets pushed to women and girls and more women and girls tend to benefit down the line? Is there a ripple effect?

I think that’s a multi-part question. I’m trying to really think about what you’re saying. The data we looked at, which we did show, was that 77% of women really wanted to invest in companies with diversity and leadership. So there’s definitely demand there, because there’s the general belief that there is better performance when there is greater diversity among the leadership team.

What was interesting was that when it came to the environment, for example, or poverty, the correlation between investment intention and reality was pretty close, but when it came to investing in women, women were almost four times under-invested in gender equality and diversity in comparison to what they would like to be doing.

Why do you think that is?

So that was the data we were able to get from the quantitative analysis. As part of our qualitative analysis, we did focus groups and interviews. What I think has happened is that there was a sense that it was hard to access products to be able to invest in women, although there certainly have been products that have been rolled out in the last year and I think that is fantastic. I think that advisors have been a barrier because it’s seen as social investing or impact investing, and there is a general sense, still, that you’ll have under-performance if you invest with their values or gender or social lenses. I think that’s changing but it’s part of the problem.

One of the other things that definitely came up, and this was probably the number one thing I heard, was it’s very hard to access investment opportunities outside of public companies, which are in themselves hard to access with a gender lens. There were some difficult to access opportunities to invest in private companies that had female founders or gender-diverse teams, or angel investing which is an important piece of this whole puzzle. But for a lot of women, especially for busy professional women who are juggling lots of things in their lives, angel investing as it’s traditionally been structured can be more time-consuming than they have time for, or be at investment levels that were larger than they might feel comfortable committing.

That’s actually why I ended up co-founding Plum Alley Investments, because there was huge demand from the qualitative research around easier ways to access the opportunities to activate capital and advance private companies founded by women entrepreneurs and gender-diverse teams.

We recently spoke to Alicia Robb at Rising Tide about getting women to be angel investors. She echoed the risk-aversion point. What do you think it is that, once women have made angle investment, stop them transitioning to doing VC and higher investments?

First of all, I think there’s very few VC funds. There are now a few VC funds that are mid-later stage focusing on women, but I think that this is where a lot of opportunity is. At Plum Alley Investments we focus predominantly on companies at the series A phase and those companies typically have more traction than companies that are first money in, four year traditional angel investing groups. So i think that there’s a lot of opportunity to break open more access to direct investing, to be able to build portfolios and private companies that aren’t just angel first money in but slightly later stage as companies are getting more traction.

How is everything going at Plum Alley Investments? What’s the feedback coming from the community?

We are big believers that this is a broad ecosystem and there’s so much work to be done here that we need all the players out there and everything they’re doing. We have fantastic relationships and collaborate with a lot of the angel groups, like Astia, Golden Seeds, and others that invest at a little earlier stage in companies. We’re believers that we will have bigger impact if we all work together.

Finally, what would you say to high net worth women who’ve decided they’d like to invest and they’re not quite sure where to start?

That’s a great question. I truly believe for women, when we think about how we want to direct our capital, it’s bigger than a question of returns. How do you want to be known in the world and how do your investments line up with that?

Take a snapshot of your portfolio and recognize which companies you are excited about investing in. For some people that might be public companies, for others that might be private companies. And find the tribe that you really resonate with, that you feel like you can build and be plugged into an ecosystem that’s vibrant, take action, and really make a difference.