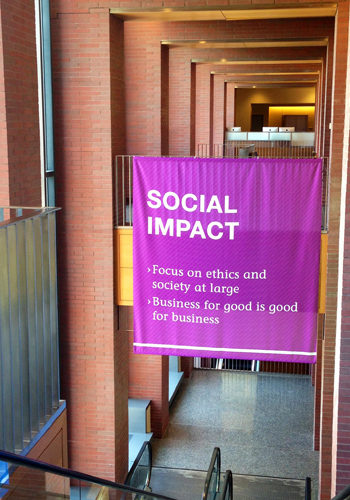 If you do a good deed but no one knows about it, does your contribution even matter? Does public sharing (or bragging, or #humblebragging) make your generous activities seem more self-serving than selfless?

In a series of studies, Wharton marketing and psychology professor Deborah Small examined myths and perceptions around the idea of “doing good,” and what motivates people to give to others.

Her research examines the fundamental processes that motivate human decision making, including the effects of emotion, perception, and sympathy on altruism and charitable giving.

In 2007, Small first published a groundbreaking study that indicated that heavy use of statistics can actually suppress charitable giving – and that when it comes to fundraising it is far better to appeal to the heart than to the head, with anecdotes and compelling personal photos over facts and figures.

Her more recently published work focused on the clash between doing well and doing good, and the perceptions around what motivates people to be generous.

In a new paper, “The Braggart’s Dilemna: On the Social Rewards and Penalties of Advertising Prosocial Behavior,” published in the Journal of Marketing Research this February,  Small and her co-authors conducted seven studies to investigate how bragging about doing good deeds affects perceived generosity. In most cases, they proposed, bragging about the good things you’ve done signals a selfish motivation and desire for credit, rather than simply acting for the sake of helping others.

What the researchers learned: when others already know about your efforts to do good, bragging hurts. But when these “prosocial behaviors” are relatively unknown, bragging informs others that you’ve behaved generously and has a positive effect on perceptions.

What does this mean for business? Or for nonprofit leaders?

“The key notion we’ve been wrestling with is the notion of authenticity. It has to look pure,” says Small. “People become suspicious; [when they see companies] bragging or making big announcements, that has mixed effects.”

On the one hand, publicly sharing your good deeds is a type of marketing; if you don’t do it – as a company or an individual – you won’t reap the social or reputational benefits that come with altruism. But the balance is complicated.

“If you do a ton of good but do it all anonymously, you don’t get any credit at all; but if you do and tell people, it’s perceived as somewhat selfish because you’re benefiting from [the marketing campaign],” Small explains. “In our research, we’ve found that bragging actually helps perceptions when people are not aware of [your work] already, but it hurts when they’re already aware of your good deeds.”

So if bragging helps others see you in a new light, it should in theory improve your reputation. You can demonstrate this effect through social stereotypes: picture a social worker bragging about the good they’ve done, versus an investment banker.

“Social workers are already stereotypically perceived as ‘good,’ so when they brag they don’t get any extra credit,” says Small. “But with investment banker, it’s unexpected.”

“In doing this research, it’s made me very self-conscious about what I really say!” notes Small.

The practical implications of her research can be applied to fundraising efforts as well.

“A reluctance to brag by some individuals may actually be a hindrance for fundraising,” Small told Knowledge@Wharton this June. “A very generous person may want to keep their donations and other good acts private so that they can signal to themselves that their motives are pure. However, we know that one of the best ways to fundraise is by telling other people of your own donations. When you tell a friend about your donations, that inspires them to donate as well. So, this gets at the conflict between doing the most good possible and appearing the most good.”

Wharton students can gain insight into this area through Professor Small’s “Marketing for Social Impact” course this fall, an MBA and undergraduate level elective bringing together approaches for for-profit and nonprofit businesses to engage customers and stakeholders around positive social effects.