Gender Lens Investing Fellow Carolyn Han shares her experience attending the New York Times’ Women in the World Summit earlier this spring. The three-day Women in the World Summit, held in New York City, presents powerful new female role models whose personal stories illuminate the most pressing international issues. Every year, the summit brings in speakers from around the world – many of whom are famous, while others are extraordinary ordinary people. 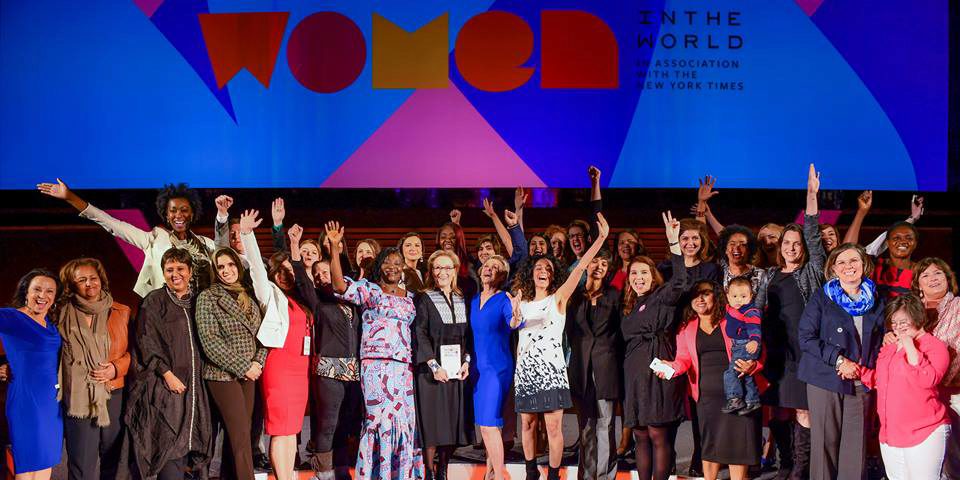 This was the most inspiring conferences I have attended, in part because of the opportunity to hear from speakers who are not household names: doctors working on the front line in Syria, a social worker and a doctor advocating for refugees, a filmmaker giving voice to a Pakistani “honor killing” victim, and a journalist-activist combating Islamic extremism.

Here are three of my many takeaways from this thought-provoking conference:

On Men and Gender Equality

“Not to quote ‘Spider-Man’, but if you’re lucky enough to be given opportunities, then you need to do right by them.” – Justin Trudeau

Women should not be alone in pushing for gender equality. Cecil Richards, President of Planned Parenthood, author Chimamanda Ngozi Adichie, and Canadian Prime Minister Justin Trudeau shared their experiences in raising both their sons and daughters to be feminists. Beyond educating boys, men also need to recognize they can make an impact.

As Ms. Adichie says, “Feminism isn’t a party just for women. Men also have to be on board.” Susan Wojcicki, the CEO of YouTube, mentioned too that having male leaders support women in corporations is important, and that she herself benefited from this type of support.

At Wharton, the Wharton 22s is an all-male student group that seeks to encourage “awareness, dialogue, and action on the part of men” regarding gender equality. To achieve gender equality, men need to be part of the solution.

On Differing Opinions and Respect

In today’s charged political climate, it is often difficult for one side to listen to or respect the other. This rang true during the session with Nikki Haley, current US Ambassador to the UN, when she was heckled by the audience.

This contrasted with the panel with Zineb El Rhazoui, a journalist whose colleagues were killed during the Charlie Hebdo attack, and Samia Hathroubi, a French Muslim activist. The two women hold widely differing views on Islam, and engaged in a heated debate. Though they were critical of each other’s’ opinions, they were also careful to address the other’s concerns. Both shared their points of view on the same topic, educating the audience on the merits in both sides’ arguments.

While advocating for what we believe to be right, we should also be open to others expressing their opinions and learn to hear where they come from – even if we do not agree with them. On campus, we should also encourage a diversity of opinions, and provide all voices a place to engage in dialogue with one another.

On Fighting the Good Fight

“We’re not going to be silenced anymore. We’re mad as hell.” – Gretchen Carlson

Women should continue to speak up and fight gender inequality wherever they are. As demonstrated by Gretchen Carlson, a former Fox News anchor, and Patricia Tomasello, a former fire investigator at the Fairfax County Fire and Rescue Department, who fought against sexual discrimination and harassment in their workplaces, it is a long road, but nothing will change if we do not say anything.

Both women are still suffering negative consequences from speaking up, but they vow to continue fighting for their rights and fair treatment in the workplace.

As we continue to move forward in our careers, we should also be unafraid to speak up and to fight for gender equality.

Carolyn Han is a joint-degree MBA / MA in International Studies student at The Wharton School and The Lauder Institute. She is interested in exploring methods of private sector investment to facilitate international development. She is a Gender Lens Investing Fellow with WSII.