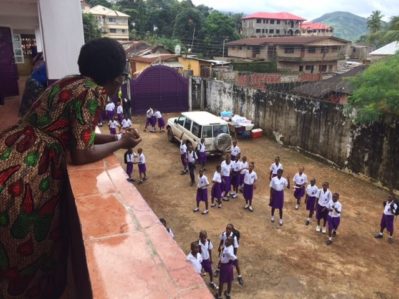 Freetown surprised me. Freetown mesmerized me.

Even having previously lived and worked in Africa, I arrived for the summer colored by media portrayals of disease and suffering in Sierra Leone. What I found was a city of poverty, inequalities and inconsistencies yes, but also of beauty, serenity and hope.

High up on the hills of Tengbeh Town was the office of Rising Academies Network (RAN) where I interned.  From the office, I could see the city winding along the Atlantic coast, hugging the lush green valleys and hills. At times, I felt acutely aware of the irony of the beauty of my surroundings and the intractable problems that RAN was working to solve.

In Sierra Leone, even though more students than ever before are in school, few are actually learning due to the poor quality of teaching. Research shows that most children reach the fourth year of Primary School unable to recognize all the letters of the alphabet, let alone read by themselves. By the end of middle school, only 1 in 8 pass both English and Maths; by the end of high school, it is just 1 in 100.  RAN is trying to change that by scaling up high quality affordable schools. Their model is based on:

I was lucky to arrive at a pivotal time in the company’s story. As a young start-up, RAN was operating 3 schools in the Freetown area. Both the business model and the impact story however, depended on scale. Over the summer, RAN was opening 5 new schools in Sierra Leone and 5 schools in neighboring Liberia under a program with the government called Partnership Schools for Liberia. This meant almost tripling the number of students in just a few months.

I was tasked with the scale-up strategy and thinking through how to ensure processes remain efficient and quality of education remains high. One of the most interesting problems I worked on was designing a curriculum feedback system.

A key to RAN’s success is its pedagogical model of using detailed lesson plans that cultivates active learning. As RAN expands to new grades, it is critical to collect feedback on how the new lesson plans are working in the classroom. But how do we collect useful feedback from over 200 teachers quickly and efficiently? Teachers’ time and abilities are constrained and information flow is hampered due to lack of connectivity.

I helped RAN design a tablet based curriculum feedback loop based on these constraints. Using an open source platform, I drafted a simple survey that teachers could fill out on the same tablet that lesson plans are delivered. The survey provides quantitative data on whether the teacher was able to finish each lesson, how clear the instructions were, and whether there are errors in the lesson plan. The survey is stored on the tablet and responses uploaded to a server once a week on the days the schools have internet access.

In designing the survey, the CEO, COO and I ran into a critical design question: To have a longer survey that provided more information, or a shorter survey to minimize time spent and thus maximize completion rate?

We realized that it would be difficult to understand the trade-off without quantitative data.

Directly applying a lesson that I’ve heard again and again from Wharton professors, we conducted an A/B test. Participating teachers read a lesson plan that was either error free, or contained and error, and filled out either a shorter or longer survey. We collected information on response times and accuracy of errors identified.  The results showed that there is virtually no response time difference but better quality data collected with a slightly longer survey.

The curriculum feedback survey is currently being piloted across schools. I saw through this effort how the data-driven decisions that we are trained to make at Wharton could contribute to maximizing the impact delivered by social enterprises like RAN.

While observing classes at RAN, I saw students eagerly raise their hands to answer questions. I saw girls stand up in front of classroom to deliver speeches confidently. I was hit with the gravitas of what I was seeing and couldn’t help but think of the importance that education made in my own life in the quest for upward mobility as a first generation immigrant. I hope that I contributed just a little bit to sustaining and continuing to raise the quality of education for students in beautiful Freetown.

Susan Liu is a second year MBA who is also pursuing a concurrent Masters in Public Administration (MPA) at the Harvard Kennedy School. Prior to graduate school Susan worked as a management consultant with the Boston Consulting Group and as a program manager with the Clinton Health Access Initiative, both in Malawi and New York. Susan is passionate about bringing business innovation, rigor and efficiency to provide better access to opportunities in low-income countries.