FastFWD connects social innovators and entrepreneurs with local government, unlocking opportunities to identify, cultivate and dispatch solutions to the pressing challenges facing cities across the nation. The program’s initial focus area will be public safety – an important issue that accounts for $1 billion per year in Philadelphia, approximately one-third of the city’s budget.

On Wednesday, October 30, FastFWD will kick-start the program with Big Think, a convening of social entrepreneurs, innovators, and thought leaders, followed by an open call for solutions.

Prior to Wharton, I led a project in Miami to increase resident engagement in the city. The project was exciting but taxing, and returning to graduate school presented me an opportunity to diversify my experiences and get outside of cities and state issues, where I had worked for my three years after Harvard.

Within a few months, however, I found myself involved in the early, exploratory phase of FastFWD, another project about a city.

On the surface, the project was similar to what I had done before: big city, lots of community assets, and some significant challenges. But underneath, there was so much more to FastFWD.

The genesis of the project is to use tools outside of the traditional city problem toolbox; the intention is to infuse innovation, entrepreneurship and disruptive thinking into Philadelphia.

So, there I was again, working on a city project, but this time taking a start-up approach to attack challenges in Philadelphia. The project has been so interesting for me that I’ve asked to stay involved even though I’m spending this semester at the Harvard Kennedy School, as part of my dual degree.

Before social innovators can tackle some of society’s most pressing urban challenges, they must have a deep and thorough understanding of the communities and sectors involved — what matters to them, what the real challenges are, and where opportunities lie.

Through the FastFWD process, I’ve been able to interact with a wide array of stakeholders in the public safety space – which we define broadly, including experts and representatives in education, community engagement, public health, public spaces and more.

I’ve interviewed professionals within the Philadelphia Police Department and other city entities who are 100 percent more open to change and new approaches than most people would give them credit for. I’ve also spoken with academics who have spent time on the ground analyzing gangs and inner-city violence, dismantling any “ivory tower” perception that their credentials might give off.

For example, we’ve learned about the connections between street lights, park cleanliness and crime. We’ve also learned that there is an abundance of public data available that could be analyzed and used to make the city safer.

This Wednesday, we’ll host a convening with leaders, entrepreneurs, innovators and select attendees across the public and private sectors to share ideas on how to improve public safety and further define our focus. This “Big Think” event is an unprecedented opportunity to join forces with local government to develop, cultivate and deploy solutions for pressing public safety challenges facing cities.

Personally, I’m glued to FastFWD. I am not only helping a city that I’ve fallen in love with, but I’m also addressing an issue in public safety that I deeply care about. 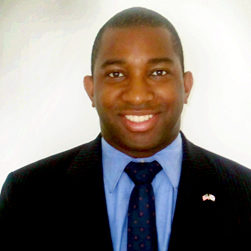 Jay Lundy is a dual degree candidate pursing an MBA at The Wharton School and an MPA at The Harvard Kennedy School. He is studying management and operations at Wharton and business and government policy at HKS. He is interested in entrepreneurship and politics in his home state, Florida.