It’s estimated that nine out of ten startups fail; 42% of this failure rate is often due to lack of an identified market need for the company’s product or service.

Ultimately, it’s about finding small ways to test your idea that are easy to throw together and have low emotional cost. In my OPIM614 Innovation class from Professor Christian Terwiesch last semester, we worked our way through a number of these tests to prove the market need for our own startup ideas and set us up for success prior to launch.

I got a chance to apply these principles as a Wharton Social Impact Fellow embedded with Philadelphia’s FastFWD accelerator, consulting to entrepreneurs like Jeff Mould, the founder of Haphire.

When I first met Mould, he had a product but hadn’t honed in on the market need. Over the course of two meetings, we worked together to apply three of the strategies I learned from Professor Terwiesch’s class to identify this need and adapt his solution accordingly.

We needed to refine, prototype, and test. 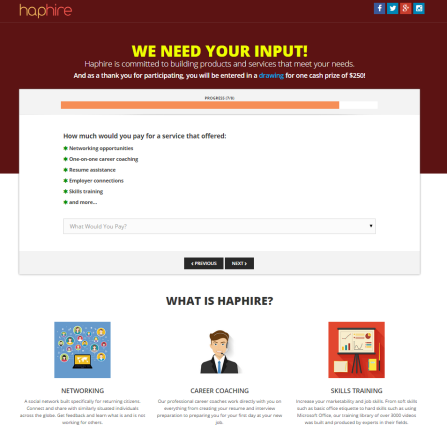 Mould has met to roughly 200 individuals with criminal records, to hear about their struggles to find employment. He learned that when these people used traditional job sites, they wasted significant time and energy applying to employers who were not willing to take a risk by hiring them.

In response, Mould built an online job forum where these job seekers could be assured that employers were willing to hire individuals with criminal records. Yet few employers posted.

Mould and I revisited his user research. It became increasingly clear that the real core need of his users was a way to address employer stigma, rather than information asymmetry. If he wanted Haphire to address this discrimination, he would need to adapt his product accordingly.

A user storyboard is a step by step visual of how a potential user might interact and use your product, and helps clarify and refine elements of an idea that can be overlooked. Using the insight that his users needed to address the stigma that prevents them from finding a job, Mould and I mapped out a product experience that would solve for this core need.

This led to Haphire’s current iteration – an online social networking and coaching site focused on helping a member rebrand their image by putting together a portfolio (resume, skills certificates, and recommendations) that highlights the efforts and work they’ve made in turning around their life.

Strategy 3: Find Quick and Easy Ways to Get the Information You Need

By the second time we met, Mould had refined the new concept and gotten feedback that he was heading in the right direction. But he still needed to figure out a pricing model for Haphire’s rebranding and coaching services. I suggested that we create a short survey targeted at his desired user to fill in the gaps about the market need and test his customer assumptions.

One month later, Mould’s concept test is almost ready to launch with a built-in-page on his website, a Facebook ad campaign in the works, and an upcoming marketing blogpost on a popular site for ex-offenders. Once he gets the results back, Mould will have a much better understanding of his target audience’s demographics and their willingness to pay, the first critical step in building a sustainable business model.

Identifying the market need for a product is a critical issue that all startups face – yet this problem can be even more difficult for social enterprises, which often target marginalized populations where users are harder to find, information is less transparent and the avenue to profit is less clear. Like Mould, social entrepreneurs need to keep a sharp focus on the customer in order to successfully balance mission and profit.

Social enterprises represent the future of our society; as Wharton’s Dean Geoffrey Garrett says, in the coming century, business will have an unprecedented role to play in society. I want to be a part of making that happen – and thanks to my Wharton education, I already am.

Justine Lai is a full-time first year Wharton MBA student. Throughout her career across research, human services and social enterprises, Justine has focused on the training and development of social entrepreneurs and intrapreneurs to push forward creative problem solving and organizational innovation.