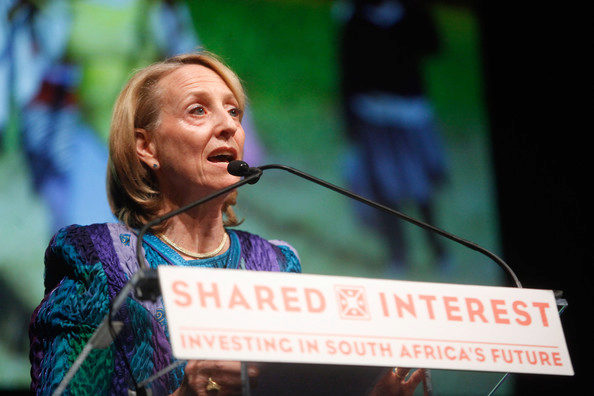 This piece was originally published on WomenEffect.com, an independent knowledge hub about gender lens investing. Women Effect’s content is now part of the Wharton Social Impact Initiative. Read more about the transition here.

Donna Katzin is the founder and CEO of Shared Interest, an impact investing firm that works for the economic empowerment of Southern African communities. She talks to Women Effect about her gender lens investing journey.

Could you give us a background into your investor journey, and tell us how you first became aware of gender in your investments?

I began my investment career at the Interfaith Center on Corporate Responsibility. We worked on getting money out of South Africa as way of putting pressure on the Apartheid regime to democratise and consent to majority rule. And when that happened in 1994, the institutional investors we were working with began to look for ways to reinvest in a much more democratic South Africa. They wanted to be sure that they were investing in grassroots communities with which they had worked until that time. So not the stock exchange, but rather investing in communities. And already at that time they had a very strong interest in women.

The majority of the members of the Interfaith Center on Corporate Responsibility at that time had a deep-rooted, faith-based feminism that was deeply important. And so from the time we first began looking at this work, it was very often through the eyes of the women in South Africa and Southern Africa who, in many ways, had been on the front lines of the struggle. When we began to create a vehicle that would enable people to re-invest in a new democratic and democratised nation, we were very conscious of the fact that we wanted to help move capital not only to low-income communities, but to people who were most excluded. And we saw, in many ways, that the primary drivers of change were and are South Africa’s women.

So we created Shared Interest – a vehicle to do that work, and not by borrowing from the United States and bringing capital to South Africa, but by developing a vehicle that would guarantee loans by South Africa’s own financial institutions – and help set South Africa on a sustainable path. We wanted to mobilise the resources in the country.

How does gender show up in your work now? Would you say that you are doing gender lens investing?

Yes, I think gender lens investing is very important, but the danger of the term is that it can segment and marginalise investors to think of it in quite narrow terms. In fact, we look for women to be drivers of change and drivers in all of our projects. It doesn’t mean that only women are involved, but we look for partners in projects that empower women and increase their decision-making and economic power. That means we could guarantee loans and provide technical assistance to a co-op in which women are not the only members, but are also enabled to enhance their voice. It could be a construction project, where women are not the only people working, but where they would be increasing their power, and also drawing on the strengths that women bring to this work, socially as well as financially.

So I agree that gender lens investing is an important term and it’s one that rallies people and brings support. But I think we have to be careful to look at women in the work we do and make sure that we do not get marginalised and seen as a subset – but rather that women’s growing voice empowers the community as a whole.

When you are assessing potential investments now, which of the gender lenses do you apply?

The most visible indicators would be women’s ownership and the percentage of women workers. However, there are indicators that also look at the impact on the community, which is harder to measure and less consistent. Looking at an agricultural project, for example, that will provide incomes to women so that they can send their daughters to university, or so that they can produce for their families and improve the health and survival of their children and grandchildren and send them to school. Those are often some of the qualitative lenses. Not all of our partners measure things the same way, but at a qualitative level, it is something that we do look for.

Beyond agriculture, are there any other themes or sectors you focus on?

Yes, actually there are four, and they aren’t always equally prioritised. Recently, we have been doing more work in agriculture than other sectors because of the tremendous impact of the drought in South and Southern Africa — the worst 104 years — because 80% of the people in countries like Mozambique live in rural areas and are supported by agriculture. So in terms of impact, national demand, national priorities, we have done a great deal of building.

However, we also look at small and growing businesses, some of which are agriculture-related, but they could also include manufacturing, distribution, transportation, infrastructure. We have done a lot of work helping microfinance institutions to access additional credit so that they can grow their portfolios and serve more clients. In that field we find women have have taken the lead because so many microfinance institutions have prioritised their work in sustaining their families and rebuilding their communities.

The final sector is low cost housing, which also immediately benefits women who have primary day-to-day responsibility for the household, but the rest of the family benefits.

Have you seen any innovative financing models that work particularly well for women and girls?

Well, one that has worked is a combination of loan guarantees and technical assistance. This is not necessarily innovative in itself, but I think the way that we do it is. Our partners on the ground provide not only risk coverage through our guarantees, but also technical support for the beneficiaries and lenders, which takes a variety of forms. Sometimes it is the process of negotiating the guarantee that builds the skills of the lender in the process of figuring out how to adapt a loan to the needs of the beneficiary. Sometimes it is more formal.

One innovative model that we helped to develop was setting up a portfolio of loans which we then guaranteed for up-and-coming women commercial farmers who then were able to expand their farms, produce more, and take their first step into commercial farming. That was a portfolio that we helped to structure, with our partner, Thembani, that also ensured that the women in the project had access to technical support.

There is another recent example at a large sugar mill in Mozambique that will purchase cane from and benefit 2,500 small-holder farmers – the majority of them women – and create an estimated 20,000 jobs. The preliminary work had been done. The EU contributed funds for technical support and land preparation. The cooperative organised itself. The government provided the cooperative members with access to land and legal authorization of borrow. The sugar mill supplied purchase agreements. But without working capital and a complement to the money that the EU put up, the project could not come alive. Our guarantee got this project into motion. I wouldn’t say that this is a model that is replicable everywhere. But it does demonstrate the impact that creative collaborations have and shows that guarantees are very often that missing piece, that catalyst, that brings all the parties together.

That’s a great example of a model that works well. What have you learned that doesn’t work so well?

We are constantly asking questions about the kind of technical support that we provide that is attuned to women’s needs. The most effective work is done where training and support for the women also includes a community-building, a skills-building component that builds on women’s strengths and helps them share their strengths and collaborate with each other. Not all training does that. So we have to be very careful to look for trainers with those sensitivities and technical skills who understand women’s social capital.

What advice would you give to investors that don’t have that much experience in gender lens investing?

Well, there are a number of organizations that are providing opportunities. The web is full of them. People can also ask their advisors if they’re investing with [women in mind] or look at an organization to see the level of its support for women. But for people getting into the field I would encourage them just to find out about the organizations they are interested in, because it’s a relatively new lens. In the process, investors will find what is important for people on the ground, and also what is important to themselves as they ask these questions.

Is a gender lens investor, for example, focusing on environment, social, and governance criteria for screening portfolios? Impact on women will be of the questions that is important. If the investor is looking at the “impact investing” space, which is where investing directly in low income communities takes place, then those questions will be a given. But I think getting to know who’s doing what, and finding out what information can be collected is really important.

And then there’s the going with the gut. Women investors who look at this field may feel disempowered because women, even women with money, are often treated or feel as though they don’t know how to make these decisions or calculations. But they can look at a project, look at its leadership, and look at results, and ask themselves, “Is this making a difference? How is it making a difference?” That is the key question – one we need to continue to raise as gender lens investing becomes more sophisticated.