Wharton graduate Chris Balme, Co-Founder and CEO of Spark, discusses a shift in the nonprofit world.

When I was starting out in the social innovation sector, there was a clear, defined line between the for-profit and nonprofit worlds. Back then, you chose sides; I went the nonprofit route.

Recently, though, that line has blurred.

In conversations with dozens of new entrepreneurs over the past year, I’ve noticed that many of them start by identifying a problem they want to solve—and only then do they decide whether to take a for-profit or nonprofit approach. 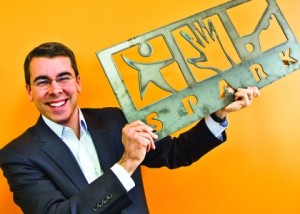 What’s driving this shift? First, millennials want a purpose-driven workplace, regardless of its for-profit or nonprofit status. Second, entrepreneurs are increasingly seizing the tools of for-profit financing to spur social change.

As a result, a whole crop of hybrid models has emerged in a gray zone.

The number of “B Corps” —  for-profits with externally audited double bottom lines that commit to maximizing both profit and social return — is growing rapidly. Other structures, like L3Cs (low-profit limited liability corporations) are also springing up, with a goal of maximizing social impact above profit.

The shift isn’t just happening on the business side—leaders in the traditional nonprofit world are starting to pivot as well.

Types of financing that have fueled for-profits for decades are becoming available for nonprofits, to great benefit. There’s a growing movement to use “social impact bonds” to fund social change efforts through the money that governments save due to a company’s efforts. A nonprofit might suggest, for example, that it could reduce the percentage of inmates who return to prison from 70 percent to 35 percent, saving a huge amount on prison costs; it would get paid out of those savings.

Someone once told me that entrepreneurs see everything around them as a resource for their mission.

That’s true whether you’re creating a nonprofit or a for-profit. And that shared resourcefulness is just the start. Just as nonprofits are borrowing business tools to finance their work, for-profits are acting like nonprofits in the ways they attract top talent by creating mission-driven cultures.

The line between the two worlds will continue to blur. And from where I stand, that increasingly blurred zone isn’t a bleak no-man’s land—it’s a bright, promising space, full of potential for fresh ideas, new collaborations and major social impact.