After earning his bachelor’s degree in business at The Wharton School Jarred Geller, W’13, went on to Teach for America (TFA). Now he’s combining his business background with creative teaching methods — and a little bit of punk rock attitude — to help his Pre-K class learn about entrepreneurship. Now in his second year of TFA, Geller explains his mission for the music-based project. 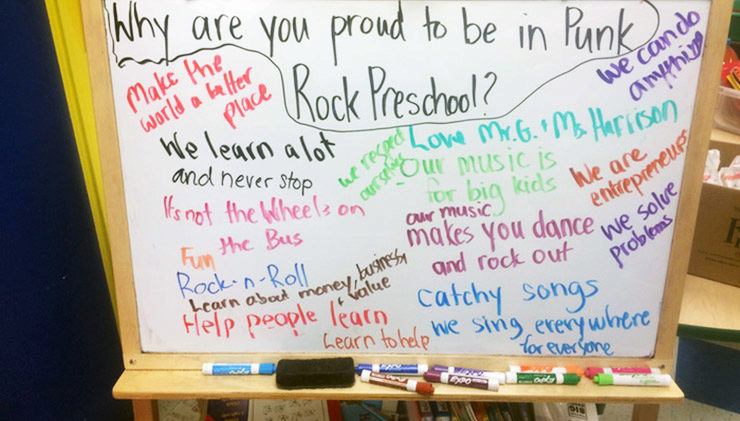 Can four-year-olds rock? Of course! At Punk Rock Preschool, a pre-kindergarten class at Eugene Field Elementary School in Oklahoma City, a group of enthusiastic kids are tearing the roof off with their catchy tune, “The Shapes Song,” and just premiered a brand-new music video on YouTube.

Their teacher, Jarred Geller, first introduced songs to his students to keep them engaged with challenging subjects like geography, outer space, and storytelling. But Geller wanted to take the learning a step further, by leaning on his Wharton business background.

Guitar riffs and fun lyrics were no longer just a means to learn difficult content; they would become a vehicle to teach the class about social entrepreneurship.

In early childhood education, everything is a learning opportunity. Geller already planned to distribute his original songs to help other classrooms learn, so he thought why keep that experience to himself? Why not let the kids get in on the action, and help them learn about social entrepreneurship in the process?

First, the students learned how businesses can solve problems; in this case, the kids identified that traditional educational music is “boring.” Over the last several months, the class created their own music video and additional content to be shared and distributed, and they have promoted and publicized their journey every step of the way.

The classroom recently set up a Kickstarter campaign to learn about business, value, and their own effectiveness at solving problems.

More importantly, Geller’s students have agreed to use their potential earnings to invest in the world, their community, and themselves.

After completing a unit on environmental science, ecology, and pollution, the class was amped to save the environment in any way they could – ending deforestation, saving endangered species, reusing, reducing, and recycling.  As a result, they created goals to use potential earnings to plant a garden at school and establish a recycling program, donate money to save endangered species — and if they surpass their goals, take a class trip to California to “be rock stars.”

Geller’s class comes from a low-income community and a school with 100% free lunch, so while these goals are ambitious, they hope that through crowdfunding they can inspire others.

Entrepreneurship is an essential skill that early education often neglects to foster, says Geller. “It teaches personal responsibility, initiative, problem solving, ambition, creativity, leadership, fulfillment, and not to mention, it fuels job creation. These are the values that we need to foster to help strengthen and build our communities.”

Geller hopes that the “Punk Rock Preschool” will be an inspiration, and a demonstration that “when we make learning relevant, rigorous, and fun, that’s how passions are developed and how lives are changed.”