In this blog post for Wharton Magazine, Cassia Peralta, WG’10, looks at businesses striving for environmental sustainability by pursuing “no impact” initiatives. These movements encourage positive behavior modification, and can have a serious effect on reducing carbon emissions, she says. 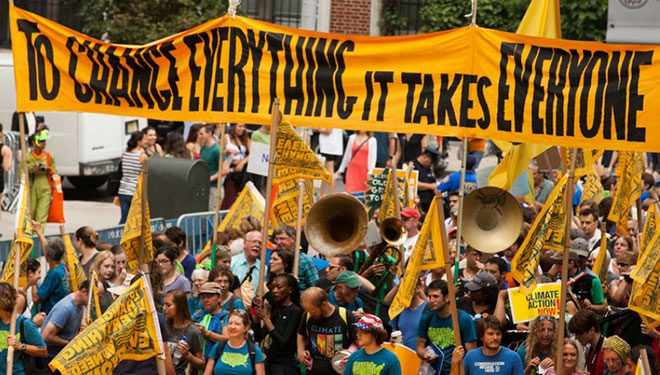 A record number of people took to the streets of New York City in September to demonstrate their concern over climate change.

In anticipation of the U.N. Climate Summit, more than 1,500 organizations joined in the People’s Climate March. The marchers advocated for political action to change living conditions and to support a better world where people and the planet can live in harmony.

Images of the 400,000 people at the Climate March coming down Sixth Avenue are still clear in my memory, and as I read the action plan announced at the end of the summit, I asked myself: How can I do my part in accomplishing this goal?

Five years ago in New York City, American writer Colin Beaven and his family spent one year living a virtually zero-waste lifestyle. It was an experiment in search of no-waste impact on the environment. At the end, it became clear to him that individual behavior can be changed, and it can influence the community around us.

There is no better way to embrace the environmental movement than living within reasonable limits.

That’s how the No Impact Project was formed.

Taking this experience to a broader context, business leaders can also conduct their operations and have a low impact. This year two Brazilian companies, Natura and BRF Foods, entered the list of the 100 companies with most sustainable practices in the world, mainly due to their low-carbon footprint initiatives.

Natura, a cosmetic and personal hygiene manufacturer, made a commitment in 2007 to reduce its greenhouse gases by 2013. To do so, Natura measured its emissions in its entire production chain, from the extraction of raw materials and inventory, to the disposal of packaging post-consumer use. The commitment to operate with less carbon was incorporated into every decision. Any new initiative was evaluated in regard to its socioenvironmental benefit, from employing the local community to preserving biodiversity. As a result, carbon emission reduction surpassed its goal; it was reduced by 33.2 percent.

BRF also incorporated initiatives toward the reduction of emissions throughout its value chain and in its strategic decisions. It measures the environmental impact of its logistics to the business travel of its employees.

Another way to have low impact is to start small, focusing on each individual. Companies can launch initiatives targeting not only their employees’ carbon footprint but also their quality of life.

A good example is an initiative I experienced at the Inter-American Development Bank called “No Impact Week,” inspired by Beaven’s experience in New York City.

The initiative calls for a healthier lifestyle by promoting a change in behavior among employees for each day of the week: from bicycle-riding to work, to taking shorter showers, to toting canvas bags to healthy eating and even swapping clothes with friends instead of purchasing new threads. It’s an initiative that delivers returns beyond the financial. At the end of the week, the prize was an intangible one: experiencing individual fulfillment by connecting with the community and thriving together with the habitat.

As U.N. Secretary-General Ban Ki-moon said at the People’s Climate March, “There is no Plan B for action because we do not have Planet B.”

Companies can and should be a catalyst for leading this change.

This post was originally published in WhartonMagazine.com on November 4.

Cassia Peralta is a Wharton MBA graduate, published author, and currently an investment officer at Inter-American Development Bank; Her work is focused on structuring sound investments while encouraging development through the implementation of sustainable business practices.